Students were able to explore London as a student, tourist and resident. They stayed in real student halls in the centre of London, travelled via public transport, visited two London universities and took part in subject specific workshops run by AccessHE member institutions. But it wasn’t all work – there was play too! Students also took a flight in the London Eye and watched the School of Rock at the theatre. 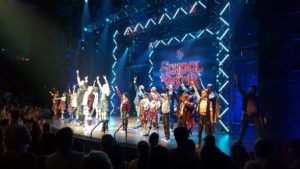 Students were treated to an cultural evening activity – School of Rock!

For the duration of this residential summer school, the students were divided into subject strands selected in their applications. Ravensbourne University London delivered the Creative Arts and Digital Media strand where the students were introduced to augmented reality apps that brought their designs and stories to life. City, University of London took charge of the Humanities and Social Sciences strand, delivering workshops on Law, Photojournalism and Counselling Psychology. Finally, St Mary’s University, Twickenham challenged the Science and Technology cohort with session dedicated to quantum physics and 3D printing!

The AccessHE Capital Summer School hopes to showcase the breadth of London HE. We wanted to show the student how different London institutions can be. First off we visited City, University of London to show the students what a central London institution might look like. The students took part in an excellent escape the room ice breaker activity before going into their subject sessions. 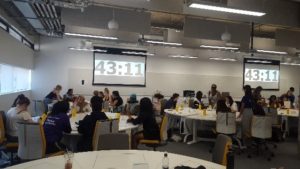 An escape room task, with lots of hidden clues and red herrings.

The second day of the summer school was kindly hosted by St Mary’s University, Twickenham, in leafy green Richmond-upon Thames. The students were given a brief introduction to the history of St Mary’s before splitting up into their subject stands.

Finally, on the last day the students visited subject related cultural institutions. The Creatives visited Cockpit Arts, an incubator for designers and makers; the Humanities cohort took part in an editorial workshop at the Guardian Education Centre; and finally the Scientists were given an introduction to veterinary sciences and conservation at the Royal Veterinary College.

Despite the heat and jam-packed itinerary, the students remained engaged and responsive throughout. The AccessHE Capital Summer School is a great opportunity for students to experience what Higher Education in London might be like and to explore whether it is the right decision for them.

We have already had some fantastic student feedback. For some, the experience was ‘completely not what [they] expected’. In the words of another: ‘I was going into this not knowing anyone and came out the other side a stronger person with an amazing new friendship group’.

We look forward to working with Greater Manchester Higher again in 2020.

Keep up to date