Below you can explore a series of research findings, reports and summaries produced by AccessHE and its HEI membership. They address topics across the student lifecycle (access — retention — success — progression) relating to widening participation audiences and underrepresented learner groups. If you have any questions, please contact us. 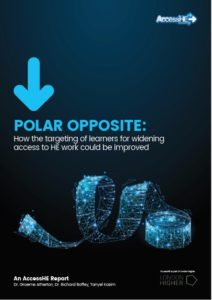 POLAR Opposite: How the targeting of learners for access to HE work could be improved (2019)

This new AccessHE report proposes a change of approach to defining and targeting ‘disadvantaged’ learner groups currently under-represented in higher education (HE) in England. Looking at the evidence regarding the drawbacks with how the present POLAR measure is being used, both nationally and regionally, it suggests a new approach based around an individual income-based measure of socio-economic disadvantage and the creation of a national widening access cohort.

With the HE regulator calling for a collaborative and evidence-based approach to access and participation, the report’s recommendations offer an instructive way forward for providers and the sector as a whole. As the report lead author and Head of AccessHE, Dr Graeme Atherton, explains:

‘Our proposed approach would enable widening access work to have a greater impact and for this impact to be better captured. It would make partnership working and data sharing between schools and HE providers easier as well as providing the foundations for national evaluation of the impact of widening access work.’

The report was presented at the AccessHE 2019 Conference, The London Factor: The Future of Access and Participation in the Capital, which took place on 17th June 2019.

Download: POLAR Opposite: How the targeting of learners for access to HE work could be improved (pdf, 1MB) 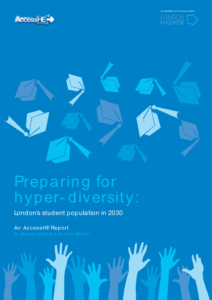 New research looking at the future profile of young people entering higher education (HE) from London shows that the numbers of younger student entering HE will increase by over 50% by 2030, nearly 75% of these students will be from BAME backgrounds, over 50,000 will be the first in the family to enter HE and the numbers entering HE eligible for free school meals may approach 100% from some parts of the capital.

The research produced by AccessHE, the network for social mobility through higher education in London, uses data on demographic changes and higher education participation to forecast who will enter HE from London by 2030. For some ethic groups, in particular those from other/mixed and African backgrounds, an increase in numbers entering HE of over 10,000 is predicted. London has for some time sent more young people eligible for free school meals to HE than any other part of the country but this gap is set to widen if present trends continue with in every inner London local authority over 60% entering HE by 2030.

As Dr. Graeme Atherton, Head of AccessHE and co-author of the report states:

‘This report shows that London is driving diversity in higher education participation in England. This diversity is a strength to be celebrated but will require HE providers to adapt and change what they do over the coming years’.

The report argues that this ‘hyper diversity’ in the students entering HE from London means that new forms of collaboration across HE providers in the capital will be required that focus on student success and retention. It also calls for HE providers and policymakers to adopt these forecasts as targets to aspire to, in making London to the most diverse place in the world to study in higher education.

The report was launched at the AccessHE Annual Conference 2018 with BT: Social Mobility and Higher Education in London, on the 20 September 2018. 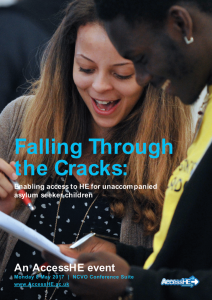 “Falling Through the Cracks”: Enabling access to HE for unaccompanied asylum seeker children (2017)

The Government is committed to widening access to higher education (HE) for students who have left care. However, for unaccompanied children claiming asylum in the UK (over 3,000 in 2015) who fall under the care of local authorities, there is very little research on their progression rates to HE nor about the challenges they face.

Launched at an AccessHE event on Monday 8 May, this report draws on the views and experiences of unaccompanied asylum seeking children (UASC) in HE, local authorities, third sector organisations, the Office for Fair Access (OFFA) and higher education institutions. The report identifies barriers to UASC progressing to HE and offers a number of recommendations for different stakeholder groups.

Full report: “Falling through the cracks: Enabling Access to HE for Unaccompanied Asylum Seeker Children” – May 2017 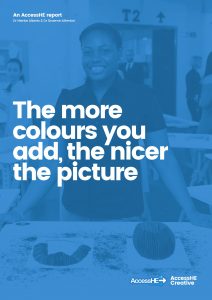 “The more colours you add, the nicer the picture”: Unlocking artistic potential in London (2016)

This report examines the challenges of widening access to creative arts and design higher education courses in London. It forms part of the early work of the AccessHE Creative Network, which aims to bring together stakeholders from across the HE and creative sectors to find collaborative solutions to address the challenges laid out in the report.

The report was launched at an event on 30 November at which Marcus Davey. Chief Executive and Artistic Director of the Roundhouse, Jacqueline Rose, Acting Head of Culture at the GLA and Steven Kavuma, Founder of Diverse School and Executive Director of S+K Project, gave keynote addresses.

The AccessHE Winter 2013 Conference ‘Social Mobility in London: The State of the City’, the first in a series of three conferences on social mobility in London, saw over 100 delegates come together on the 18 November 2013 at the LCA Business School.

The event was chaired by Sadiq Khan, then MP for Tooting and Shadow Lord Chancellor and Shadow Secretary of State for Justice with a keynote address from Baroness Tyler of Enfield, Vice Chair of the All Party Parliamentary Group on Social Mobility. The attached report ‘Social Mobility in London: The Role of Higher Education’ by Dr Graeme Atherton (Head, AccessHE) was launched at the conference.

Following the ongoing developments with the spread of coronavirus (COVID-19) and the significant disruption this is causing across the HE sector, AccessHE has cancelled all in-person events indefinitely, in line with government advice and action taken across the HE sector.

With the coronavirus outbreak threatening to widen existing equality and attainment gaps, it has never been more important to ensure that all London learners, regardless of their background, circumstances or characteristics, benefit from higher education and the opportunities it provides. We look forward to continuing to work with you to achieve this objective, and please be assured that, for as long as face-to-face meetings are not possible, we remain available to speak at your convenience via Microsoft Teams, Skype, Zoom, over the phone or via e-mail (accessHE@londonhigher.ac.uk).

Our very best wishes to you and your colleagues, families and friends in the meantime.