In 2020, AccessHE surveyed 1,000 Year 12 and 13 students from across the country on their attitudes to higher education (HE) and their experiences studying during the first Covid-19 lockdown. The responses we got illuminated what a large range of England’s young people felt about school, higher education and learning during the pandemic and informed our outreach work last year.

A year later, these students have continued their education through two more lockdowns, continued disruption to school and HE provision. They are a year older, progressing out of school into HE, training and employment. When we talk about these students now, it is worth remembering how different their experiences of the early days of the pandemic were.

Last year’s research found evidence of some divides between how students in London and the rest of the country fared during the pandemic. For example, the one third of young Londoners who received no career or future study support during the first lockdown are now entering work and study. Supporting these learners, and the students who are sitting in their old classrooms in schools and colleges now, will require an awareness of how 2020 treated London’s communities differently.

Learning during the pandemic

One area covered by 2020’s research in detail was the amount of contact students had had with their schools and colleges, and with HEIs. We found that London students had, on average, fewer hours of study per day and fewer hours of online teaching sessions than other students. 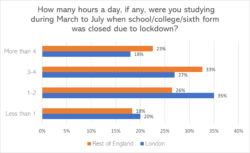 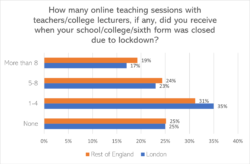 London students were also less likely to say they had access to a suitable study space or a computer, tablet or laptop for their sole use whenever they needed it. When the London HE sector talks about the ‘digital divide’ that became so prominent during the pandemic, we should be aware of the scale of this issue here.

For students in Years 12 and 13, of course, this time at school is important for more than just studying for their exams. Students in their final two years are writing applications for university and other pathways. Good quality support during these years makes a big difference to how prepared they are to progress after school, and young Londoners indicated more than any other group that they though they needed more support on HE progression. 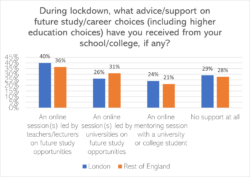 Students from all areas of the country indicated they were accessing advice and support on their future study and career choices during lockdown. There was a slight difference in where students from different areas accessed that support (London students were more likely to attend sessions led by their school or college; students from the rest of England were more likely to access university sessions), but overall rates of accessing this support were similar.

When asked about some changes they might have considered making to their HE plans, some groups seemed to be much more likely to have changed their plans in response to Covid-19.

Comparing students who claim free school meals (FSM) to students who do not, FSM students were significantly more likely to consider whether they could afford HE, changing courses, living at home or choosing a university close to home. Lower income students in this data seem to be more likely to have to change their plans, possibly because their households have been hit harder financially by the pandemic and they are considering cheaper options.

For BAME students, the differences were smaller. BAME groups were slightly more likely to consider whether they could afford to go to HE, and slightly less likely to think they would go on to HE at all. The gaps between White and BAME students were smaller than the gaps between FSM and non-FSM students, and we know from previous research that there is a wide range of experiences and views across different BAME groups and no single experience of education that all these groups share.

Several of the findings of this research have interesting resonances with AccessHE’s 2021 research, which will be published shortly. We can see, still, a slightly stronger focus on careers and employability as a reason to attend HE among young people from WP backgrounds.

There is some evidence in 2020’s data of London’s ‘Covid cohort’ accessing information, advice and guidance about HE differently to the rest of the country, and doing it on a different timeline. Supporting young Londoners into HE seems to require research into the particular characteristics and attitudes of these groups.

When 2021’s research is published next week, we will be drilling down deeper into how London’s sub-communities feel about HE in 2021 and how young people are learning now. For more details on the report launch, please contact accesshe@londonhigher.ac.uk.